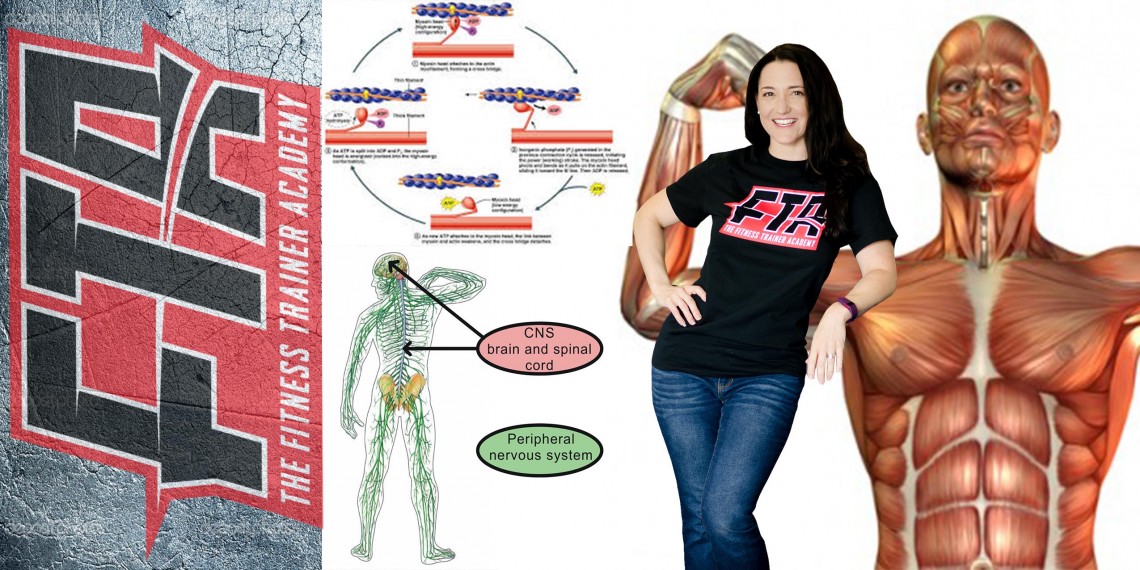 Is it just me, or are the micro details of the inner workings of the human body, some what boring? lol   Okay… maybe boring is a harsh word, but I have to admit as a fitness enthusiast and personal trainer, you would think (or hope) that I would be excited by all things fitness related, right? The truth is, there are some parts of the fitness world that still elude me, particularly those parts related to the science of the nervous and muscular systems (as it relates to exercise, of course).

SO, I ask myself: why not become more familiar with that which I consider to be elusive so that it becomes no longer elusive but familiar? What a crazy concept, right?!  And after all, part of why I do love the health and fitness industry so much, is the fact that there will always be something new to learn; there will always be areas of knowledge to better familiarize myself with; and there will always be room for improvement as an athlete, a trainer, and a teacher.

So why is it that I consider the aforementioned “science of the nervous and muscular system as it relates to exercise” to be so “elusive?”

Simply stated, it all just seems so COMPLICATED and complex. (“Axon Terminal,” “Sarcoplasmic Reticulum,” “Troponin Bond,” “Adenosine Triphosphate.” Yikes!) But is it really as complicated and complex as it sounds?  If I were to take apart all aspects of the nervous and muscular system and study each one gradually, each part one by one, would it perhaps seem less daunting?  My first thought is yes, it would seem a lot less complicated if I really took the time to familiarize myself with each part separately, without trying to grasp all concepts simultaneously.  For instance, if I were to choose to study just how a muscle contracts, I might just be able to understand it better than if I studied the subject in conjunction with all other systems within the nervous system.  So on that note…

A Very Basic Look At How A Muscle Contracts

So how exactly does a muscle contract, say during a bicep curl for example?  Well to try and keep this simple, I thought I would line it up in a step by step process.  Now I’m going to be the first to tell you, no matter how you spin it, this may take a few times of studying to grasp.  There is no fully getting around t 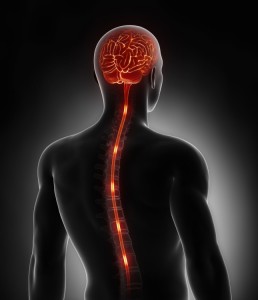 he complexity of the muscle contraction, but I will do my best to keep it simple and easy to follow.   I also will throw in a cool video at the bottom! (I know a video sometimes helps me grab hold of the information).

1, Central Nervous System (CNS): It all starts with the central nervous system (consisting of the brain and spine).  The brain sends a signal known as the Action Potential, or as I like to call it, the “flex that bicep” signal, down the spinal cord to the peripheral nervous system (the nerves that connect the central nervous system to the rest of the body).   The action potential is sent from the CNS down a long series of efferent neurons.  Long story short, our brain is sending our muscle a signal to get things moving.  Now I wish it was this easy… but unfortunately there are a few more moving parts.

2, The Sarcomere:  The sarcomere is the basic unit of striated muscle tissue.  When a muscle is viewed under a microscope, a person could see it contains what appears to be a striped pattern, aka “striations”.  This pattern is formed by these units known as sarcomer

es.   There are thousands of sarcomeres within a single muscle cell.  Within these sarcomeres are the main proteins responsible for the shortening and lengthening of a muscle.   These proteins are Myosin and Actin, and the shortening / lengthening that they perform is known as the “Sliding Filament Theory”.  Myosin, which is a thicker filament, is arranged in a cylinder shape.  The thinner filament is a protein called Actin, which is often described as looking like two strands of pearls wrapped around each other.

3, The Sliding Filament Theory:  Okay, to recap, we’ve sent a signal (action potential) from the CNS down to the muscle cell, specifically the sarcomere, which each muscle cell contains thousands of.  As mentioned above, two primary proteins within each sarcomere (actin and myosin) are going to initiat 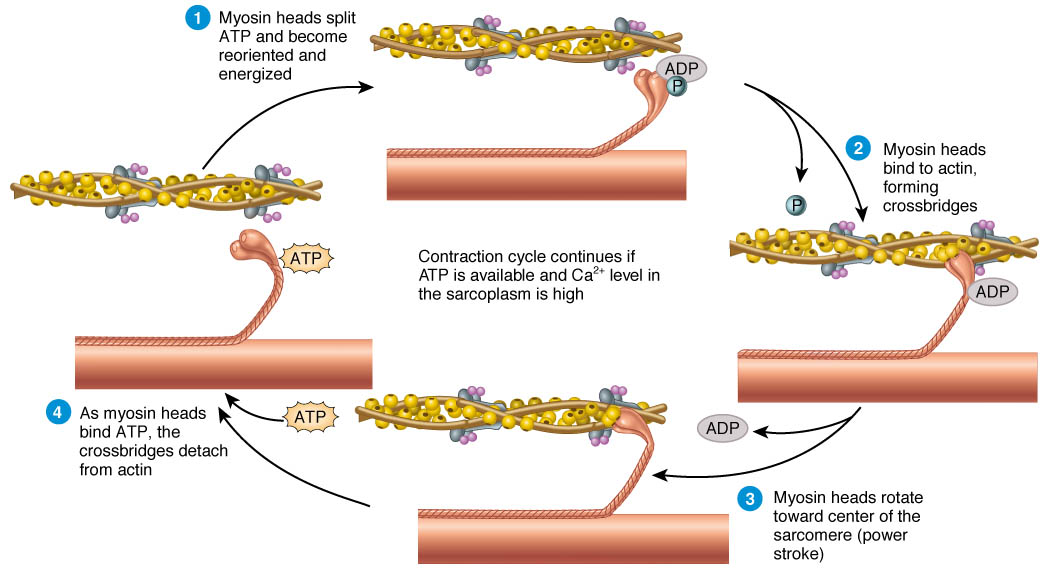 e the muscle contraction, also known as “The Sliding Filament Theory”.  The sliding filament theory is the mechanism for this muscle contraction based on these two proteins sliding past each other, therefor generating movement.  When Adenosine Triphosphate or for short, ATP (which we won’t go into tons of detail on, but just know it as, energy) undergoes hydrolysis, one of the phosphate bonds is released into the muscle cell.  This allows the thick filament Myosin to bond with the thin filament Actin via cross bridges.  Actin then slides past the thicker filament Myosin, therefor creating a shortening cycle.   An easy way I find to remember which filament does the sliding is that actin sounds similar to “action.”  Ironically though, it is the myosin that is actually grabbing the actin and intern moving it.  But the appearance of the movement is the actin protein sliding across the myosin.

4, Tropomyosin and Troponin:  It is also important to note that the only way myosin and actin can bound forming these crossbridges is through the gateway of tropomyosin.   Tropomyosin is a long rod-like protein within each of the actin filaments.  Attached to the tropomyosin is a shorter bead-like protein complex called troponin.  Tropomyosin and troponin are the molecular switches that control the interaction of actin and myosin during a muscle contraction.   When calcium ions are released from the sarcoplasmic reticulum (again something we will not go into depth on, but it stores calcium), they bond with troponin.  This allows the crossbridge sites to open up and allow myosin to connect with actin.  Without this, the two protein filaments would not be able to connect and the muscle could not contract. 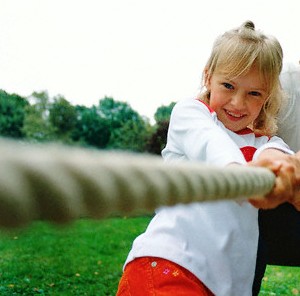 This brief description of a muscle contraction is as simple and basic as I could possibly make it because there is just so much more involved in the process.  So much more, in fact, that the Sliding Filament Theory alone is almost always described using an analogy in order for the layman to understand it. The analogies range from describing rowing in the water to moving two bookshelves in towards each other with ropes.

I think the most helpful analogy I found was written by Dr. Craig Freudenrich and it describes how you pull something up with a rope:

“Grab the rope with both hands, arms extended. Loosen your grip with one hand, let’s say the left hand, and maintain your grip with the right. With your righthand holding the rope, change your right arm’s shape to shorten its reach and pull the rope toward you. Grab the rope with your extended left hand and release your right hand’s grip. Change your left arm’s shape to shorten it and pull the rope, returning your right arm to its original extended position so it can grab the rope. Repeat steps 2 through 5, alternating arms, until you finish.”

If you aren’t feeling that analogy, check out this sweet YouTube video I found.  This is pretty easy to follow along in my opinion

Wrapping It All Up

The inner workings of our nervous and muscular system can be complex, lets just face it.  This is a very basic overview of how a muscle contracts, but please keep in mind that there are is much more detail that could be added.  As I mentioned in the beginning, this is something I have always struggled with.  As a Personal Trainer we tend to focus on the more practical and hands-on aspects to the career.  But it is important that we spend time looking more in depth on the things we may struggle with.   Anatomy and physiology may seem boring, but believe me when I say, it will truly refine you into a stronger and more proficient Personal Trainer.

P.S.  If you like more videos like the one above ( I know I do ) here are a couple more!